The Rat by Author Brian Whitaker 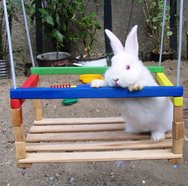 The afternoon turned muggy as I slaved away in the kitchen. I gazed out and watched my bodacious fiery super heroine wife, also Admiral Doolittle’s granddaughter, worshiping the sun.  I was making a special candle light dinner for Brooke. I didn’t want to screw this up; it would be our first meal as a newlywed couple in our humble abode. Thus I slaved away even though I still had a few hours of day light left.

I took the first phase out of the oven and placed them on the cooling rack when things got really hot. Brooke poked her head in the sliding glass door wearing a fluffy teal robe, licking her intoxicating red lips. Her robe was loosely tied as I caught a glimpse of her teal polka dot string bikini. "Hello luv," she purred as she held up an empty glass, "I’m a little parched. Can you pretty please pour me another glass of refreshing lemonade?"

Don't have to ask me twice! “But of course!” I smiled, stopped what I was doing and marched over to the refrigerator. I pulled out the pitcher of freshly made delicious lemonade and poured her a refreshing glassful.

The Old Man’s granddaughter flashed a devious smile, “Thank you luv, I don’t care what my grandfather says about you.” She laughed and walked back out poolside, putting a little extra swing in her step. She looked over her shoulder and gave me a mischievous little smile.

Twenty minutes later I took a break and walked back out to the sliding glass door. I opened it and walked out onto the deck; I lifted my eyes towards Heaven and thanked God that I was the redhead’s husband. Brooke was trying her best to make the US Olympic backstroking team. Her hand touched the lip of the pool and turned around, she saw me standing there and smirked, “Enjoying the view luv?”
“Immensely,” I replied.

“I appreciate that Ryan, but if you burn my favorite dinner the only view you’ll be enjoying tonight is the ceiling fan in the living room,” she batted her pretty little eyelids as she finished.

That was my cue to skidoo. I clapped my hands, about-faced, and marched back inside just as the annoying oven buzzer began to buzz. I turned it off and removed the piping hot sinful desserts. Suddenly there was a blood curdling scream emanating from the pool. I immediately dropped the last batch onto the rack, carelessly tossed aside my mittens. I dashed towards to the pool at Mach 2 with my hair on fire, covering my TN inflicted ear with my left hand while wondering what could possibly frighten a battle tested superheroine like Brooke.

The frantic ginger raced towards the sliding glass door. It was amazing that Brooke didn’t suffer from a major wardrobe malfunction, her teal polka dot bikini bra held as she rushed towards the door. My fair heroine wasn’t about to let anything stand in her way, including yours truly! She bowled me over… that wasn’t going to help my Trigeminal Neuralgia pain. She continued to run into the house as I stumbled to my feet. I followed her to bedroom where she slammed the door right on my poor nose!

Not to be redundant, but that wasn't going to help my infamous headaches or excruciating TN pain at all. I took a step backwards and nearly doubled over as I held my burning nose. I shook my head and blinked the oncoming twinge out of my left eye. I cautiously opened the door praying that I wasn’t going to be kissed by a frying pan. I saw the bed shaking, "Luv?"

"There's something in the pool!" she exclaimed as she trembled under the covers.
"What? Is it a kraken, leviathan, killer whale, Hue the Manatee, a mutant New England lobster or a crossed eyed drooling shark that teamed up with the paparazzi for synchronized swimming?" I asked as I neared, my curiosity growing stronger to know what could possibly reduce this prime zombie hunting machine to shivering and hiding under a blanket.

"A rat… it swam right over me!" she thundered as I pulled the covers off. She looked up at me as her shapely toned body continued to tremble with fear. Brooke grabbed the covers and threw them back over her shivering frame.

"Rat? Crap,” I replied with complete disgust I looked back out her door and into the hall. Great, I was going to have to dispose of the rat, shock the pool, and then balance the PH; taking precious time away from prepping that special candle lit dinner of ours.
I walked out to the pool and grabbed the skimming net as a shaky Brooke timidly watched from the safety of the glass door. She rested her quivering body against the jamb as she placed a hand on the outside wall. Her blue eyes were full of fear, “Be, be careful Ryan.”

I nodded; it wasn’t like I was hunting icky spiders. …Spiders, I shivered for a moment as I thought about those hideous eight legged creatures. I hate spiders, but I’m digressing; don’t like hunting them, mutant palmetto bugs or a rancid stink bug. I closed my hazel eyes and shivered again at the thought of a spider or a disgusting Florida palmetto bug flying right at me. I opened my eyes and looked for the long tailed varmint.

I spotted the wet rodent swimming away from a skimmer and snared it with the net. I was about to send it down to its watery grave when I noticed two very important things. It had big ears and a puffy chocolate tail. Huh? I leaned forward for a further inspection and uttered, "It's a rabbit."
"Rabbit?" the fair heroine mumbled as she still clutched the wall tightly.
"Ah, poor thing," I said as I pulled it up by the back of its neck. I rested it in my arms and took it over to a not so receptive Brooke.
"RYAN TIBERIOUS WOLF! GET THAT BLOODY THING AWAY FROM ME!!!" she thundered as her feet began to pound the life out of the living room carpet.

"It's a rabbit," I calmly replied as I petted its wet fur. I raised one of its long ears up, “See?”
"OH!" she puckered her red lips as she realized it was a little cute bunny rabbit after all. She quickly disappeared and brought out a carrot. Brooke placed the orange vegetable in front of the rabbit's pink nose. It sniffed it a couple of times and began to devour it. "Poor thing must be hungry," she stated as she petted its wet fur.

I put it down in the shade, placed its meal next to it, and quietly walked back inside with my gorgeous sexy wife. I slowly pulled the sliding glass door closed and walked back into the kitchen. I accidentally put on the wrong apron around my neck as I started to go back to our special candle lit dinner.
"Don't mind if I do," Brooke purred as she walked over to me.
"What are you talking about?" I turned around and asked as I looked about the room trying to figure out what she was talking about.
​
"This," she purred as she grabbed the bottom of my apron before I could tie it. It read: Kiss the Cook.
"Oh!" I replied feigning shock as she pulled my lips onto her inebriating ones and oh it’s so good to be the husband…