BRAINS are just as important as BOOBS! Published by Rebecca D Thorpe‎ to WRAL TV 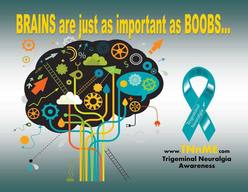 Image by Paperstreet
I'm sorry to hear that a story about Trigeminal Neuralgia has been bumped in October to accommodate a story about breast cancer since it's a broader reaching subject.

It's reasoning like this that makes it hard for Trigeminal Neuralgia patients all over the world to be heard and understood because no one wants to talk about what no one has heard of.
Perhaps you just don't understand how bad Trigeminal Neuralgia is if your picking boobs over brains, so let me explain it to you in a way you won't find on google.

Much like the insulation around an electrical wire, the myelin sheath around the trigeminal nerve enables electrical impulses to be conducted along the nerve fiber accurately. When the myelin sheath is damaged it's like live wires touching each other and the correct information to the brain is not being sent.
​
A simple breeze, shaving, brushing your teeth and many other sensations can be received by the brain as excruciating pain in the form of shocks and stabbing pain in one or more areas of the face.

If you've ever had a severe toothache, been punched in the nose, poked in the eye, had a migraine or a sinus infection, then you have experienced a small portion of the pain that the trigeminal nerve is capable of sending to the brain.

Just imagine all that at the same time -- to the extreme -- and add in your face being hooked up to a car battery at the same time. Yes, there is a reason why Trigeminal Neuralgia is often called the world's worst pain. It hurts like nothing you've ever felt in your life.
If you're lucky the mixed-up signals are brief. But some can last for hours, days, weeks. Some people have it constantly and some people have it for brief moments hundreds of times a day.

Each case is different, as is what medication, treatment or surgery you might best respond to. It really is different in every case, which is why we so desperately need research into Trigeminal Neuralgia. Research is getting close to explaining some things about Trigeminal Neuralgia. But because it's so rare -- only 4 to 8 million sufferers worldwide -- research funding is hard to get.

Year after year we are turned down by the World Health Organization despite the severity of the pain, and the more than 20,000 signatures on a petition to them. The WHO is a specialized part of the United Nations, concerned with international public health. Being listed by the organization would mean money for research and maybe even someday a cure.

For now, we with TN are doing it on our own. Each organization, association, committee, page and group about Trigeminal Neuralgia exists because someone with the disease created it.

We have asked, we have cried, we have begged, we have gotten angry, depressed, lost homes, jobs, family, friends, even our lives, waiting for help to come from someone, anyone other than us ...

We are tired, we are weary and we are in pain. But we are fierce, we are strong and are united across the world to bring awareness to Trigeminal Neuralgia.