TNNME: TRIGEMINAL NEURALGIA and ME
May you RIP Daniel R Snodgrass 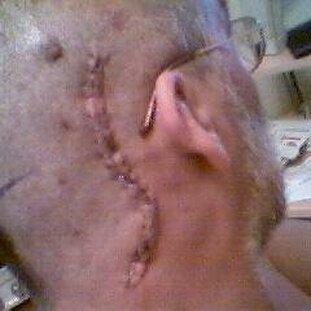 Dear Friends,
I have had marvelous and caring healthcare professionals while Climbing Trigeminal.

Born Daniel Robert, I am Bob Snodgrass, or "Snodgrass Trigeminal" in a search.  A bite of a sandwich fell from my mouth during a lunch break as an LNA at a nursing facility on January 15, 2007, at about 5:43 PM.
Being healthy, a couple of months past 50, and missing only wisdom teeth, went to my Dentist of over 30 years who speculated Bells Palsy.  Referred to an Oral Surgeon who numbed my whole face and sent me to a Neurologist that afternoon of January 25, 2007.

My medical records with the combination of dozens of PET/CT Scans, MRI/MRAs, and Lumbar Punctures, well, playing those CDs burned out my last computer.  The Myelogram was the most painful test procedure.

Jokes had all around with my "new best specialist friends" at the local Elliot Health System, MGH, DHMC-Lebanon, and others, as the left frontal sinus disease has nothing to do with what is happening at the base of my skull. Trigeminal", or, TN 1 in the V2 area.


First line of defense was Carbatrol.  It worked so well that I tolerated the burning rash for several weeks, because it didn't hurt as much as the Trigeminal pain.  Resulting in Toxic Epidermal Necrolysis with a six month recovery using Cyclosporine and at-home IVIG therapy.  Watching my skin slough, once going to the ER to have a shoe removed as dried blood had glued it on.

It was a tough Spring and Summer, I was desperate for action, having that half a year to do a little research.  My first Trigeminal support was a phone call to the TNA Facial Pain Association.  They connected me with two women from New Hampshire, and I couldn't talk for long periods, though we did chat on and off for a couple of months.

I joined many online forums, mainly staying on ones with words only, as some with photos and interactive chat rooms were a little confusing.
It was at the discretion of the Neurosurgery team, though they recommended the SRS Cyberknife, performed a 7-pad MVD, because of a last-minute scan in November 2007.

The MVD lasted two weeks to the day, within a year, I would have two unsuccessful Radiosurgeries.  The first also lasted two weeks to the day. The second radiosurgery left me learning bigger medical terms, such as Dysmetria/Bradykinesia, and Cerebellar Ataxia.
Failing the Neuropsych Eval, Social Security awarded me disability and a representative payee. Downsizing due to iatrogenic poverty, I now live in public housing, where I advocate for my elderly and disabled neighbors, because I am handicapable.

Grateful for some cognitive-regeneration due to Trigeminal Neuralgia treatments without hair loss is funny to me, as is the milk hasn't turned to cottage cheese in my cabinets since 2010, and being down from 51 to 17 pills daily, while waiting for 24th century technology.  The Splotchy Tongue, Oral Lichen Planus from Ativan helped a bit with that.

Having endured most everything this disorder can "gift" to an adult, lends time to reflect on children having this.  I empathize with those considering the Rainbow Bridge, and have no patience for people who "think" they have TN.

Perhaps, in my case this is part of the natural aging process, as no one in my familial history appears to have been afflicted.

I once said to my Neurologist, "This isn't funny anymore."  He said something similar to, 'I was the only one who thought so, and to consider in the waiting room that I was sitting between a person with Multiple Sclerosis and Muscular Dystrophy.'

I am not a candidate for further surgical interventions, including brain stimulators.  Currently taking Neurontin 1,200MG, Baclofen 40MG, and Keppra 3,000MG at 6 hour intervals.

The original little spot that runs from my upper right lip to my lower right eyelid occasionally causes tears from the unknown, with a boatload of variables, and some many, very dear Friends.

Wondering why so many support groups are "Closed Groups", as I believe more awareness is needed.  So tired of hearing "You look good! and Trigeminal whatchamacallit?" in the same sentence.

Thank you for your time in reading my story.