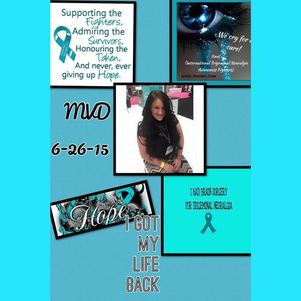 "I was diagnosed with Trigeminal Neuralgia on the left side of my face in January 2015.  My life was a whirlwind...I have always thought that I had bad teeth; the sensitivity on the left side of my mouth was unreal.  After two root canals, there was no hope of any pain subsiding.  I ended up going to my family doctor who diagnosed me, he asked me several questions and told me that he just saved me a lot of time and money because he has Trigeminal Neuralgia and that I am a "classic case."

So I didn't really understand what it was...at the time I was running my company and just trying to get by every day.  My MRI confirmed that it was indeed TN, and I was sent to a neurologist.  This neurologist, I was not a fan of at all.  He was totally not empathetic at all.  After nearly having a nervous breakdown on Tegretol and sleeping my days away (I was extremely allergic to Tegretol) I tried Vimpat, Gabapentin, and then finished off with Lyrica.  After telling my neurologist that I refused to live this way, and also spending weekly trips in the ER due to the ice picking attacks on my brain, I explained that I wanted to have MVD surgery.
​
The neurologist reluctantly sent me to a neurosurgeon, Dr. Seiff.  Seiff agreed to operate on me and he explained that not only was I the youngest patient (28 years old) that he has ever operated on, that he has also not seen a more clear case of Trigeminal Neuralgia.  We scheduled surgery for a few weeks out.  I got my affairs in order...literally, made a will, put my business in a trust, etc.  I couldn’t believe at my age that I thought to myself that I might not make it through the surgery...my anxiety was high.

The surgery was scheduled for June 26, 2015.  I vaguely remember the details of surgery, but I know for a fact that I couldn't walk, couldn’t hear, and could barely see.  Not to mention, I had a spinal drain in my back due to a CSF leak.  They released me after a week, but I could barely walk and felt terrible.  Three days later, I was readmitted into the hospital, and had another spinal drain put it in, the doctors told me that I was just a few days away from contracting Spinal Meningitis.  I was SO sick!  Vomiting, had no balance, could not walk.  What a mess!  It took another week, but they took the drain out and I was feeling a lot better.  Post op, it was four months of recovery.

To this day, I am still in recovery.  Brain Surgery did give me a new handle on life- Life is too short to be miserable and do things that you do not want to do.  With that, I sold my company because it was no longer providing me with happiness.

And presently, I am attending nursing school...because of my experience with TN and MVD I feel that I could truly empathize and help patients suffering from neurological disorders.

​ My advice to those suffering is to ALWAYS get a second opinion, and just because TN is not shown on the MRI, doesn't mean that surgery is not the answer."