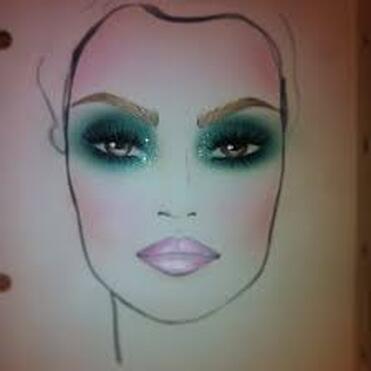 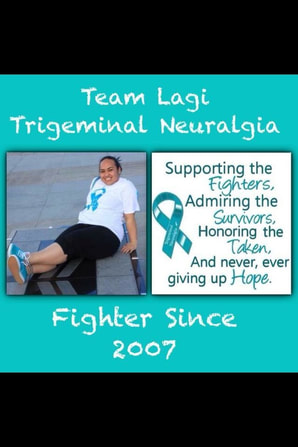 I’m a 34 year old female who has always battled with poor health and this has seen me embarking on some of the most challenging and rewarding journeys.
Every outcome is a blessing in some way and teaches you something about who you are and what life truly is. During numerous hospital visits and stays it’s given me an opportunity to tell those I love just how much I value and respect them. They are the fabric of my life and make my life battles feel beautiful and worthwhile.

Hello, my name is Lagi Leau. I’ve had Trigeminal Neuralgia since December 13, 2007 at the age of 26. 9 years now and I am still learning about the condition that had changed my life.

I had just started my Root Canal procedure on left molar. 2 days after while at work taking calls as I was a Customer Service Representative, I felt like what to be knives being tossed towards my eye and temple and a live wire pressed against my jaw and cheek.

This pain escalated towards the top of my head then settled after a few minutes. I went straight to my Dentist who prescribed me with antibiotics for the pain and said I should be fine. I rang in sick from work for the next day as I was in so much pain.
I was recommended to see another dentist, as pain got too unbearable and opted to just have molar extracted. Days after I was still experiencing these pains, my Dr. & Dentist then started saying it could be sinusitis but that too was ruled out.

The two both suggested it could be Trigeminal Neuralgia & prescribed me more antibiotics and a referral to see a neurologist but will have to wait until after the Xmas break as it was now Xmas Eve 2007.Xmas Day I was ‘drugged out’ and had 2-3 episodes & tugging at my hair.
Boxing Day came and my family had a beach trip. There I started having more intense and excruciating pains that brought me to my knees and crying out for help. My dentist was on the phone saying to either cry it out or go to Emergency for some stronger pain relief.
I had 2 episodes in a packed out waiting room (which at the time I didn’t care who was around until pain would subside) so hospital staff put me into a room away from confused eyes as it only looked like a ‘toothache’. That night, after an x-ray I was sent home with a prescription for amitriptyline as well as an appointment with hospital Oral Practitioner the next day. Finally, 13-15 days later it was confirmed and I was diagnosed with Tic Dolorosa or Trigeminal Neuralgia also duped as The Suicide Disease.

April 2008
I met my Neurologist Dr. Jennifer Somerfield 4 months later, here she explained TN more to me. She referred me to a Neurosurgeon who will explain surgical options available to me.
This was one of the hardest months for me as I had to quit playing Netball (Club – outdoors & Social – indoor), cancel my Gym Membership & resign from my job. People (my employers) were not supportive, I started hearing remarks like ‘oh it’s only a toothache, wonder how she’d handle going through childbirth’. It hurt but I understood where they were coming from as after reading pages of TN online, I still didn’t understand it myself. That was also the 1st day I wanted to pack it all in and end it once and for all. But with my family & close friends concerns I knew I had to hold it together for them.

June 2008
Here I met my Neurosurgeon (in his late 50s) Dr. Chris Furneaux who is somewhat the best in NZ with appalling bedside manners. He was blunt but with 33 years’ experience I knew I was safe if ever I chose to have the MVD (Microvascular Decompression) Procedure. I declined surgery as I wanted to explore other options. I tried Acupuncture, Homeopathy & being of Samoan descent I tried natural therapy as well as seeing a Witchcraft Doctor.  With me now reaching the max dosages on all my medication (Gapabentin 3200mg, Tegretol 1600mg & Amitripiline 75mg) I was starting to forget things, dizzy spells, fatigue and still in crippling pain, I finally gave into surgery.

November 2, 2010
I kissed my loved ones goodbye and was wheeled away to theatre, waking up 8 hours later with no signs of any TN pain. Post-op was excellent I was discharged Day 5 and all 18 stitches were out by Day 10. I was told by hospital staff to wean off my ALL my medication within Day 7 causing me to suffer really bad withdrawals. The rocking motions, chills, sweating, upset, wanting to be left alone, no appetite and fatigue. I saw my doctor whom then gave me 2 options to go back on my medication and wean off properly or to continue on going ‘cold turkey’ and that 1st 2 days is the hardest and will soon get better. I chose to carry on with no medication and finally came right around day 10.

April 2011
I was given the all clear from my Neurologist and started my new job as a Customer Service Advisor for Water Company. I started exercising again and took up Boxing in the hopes of shredding some ‘fat’ due to the 23kg weight gain.  My 30th that year I got gifted to Bungy Jump from AJ Hackett Auckland Harbor Bridge so I got a clearance from Neurosurgeon & Registrar to jump and that was ticked one off my bucket list. I went with family to Vanuatu for a wedding & it hit me that I was able to party away & enjoy life with no boundaries.

September 2012
I was starting to feel the ‘live bolts’ again and a new one but the left side of my tongue felt  numb, so I saw my GP who said to prepare myself as it could be my TN coming back. As much as I wanted to ignore it I knew I couldn’t. Sept 28 at work it hit me and I was back under my desk pulling at my hair trying to be as quiet as I can be. As soon as episode was over I was out the door in tears at my Doctors clinic and waiting for a prescription for tegretol and gabapentin. A week later, I was let off from employment due to the nature of medication I was taking. I’ve been recommended 2nd MVD procedure but have declined it. My reason being if it didn’t work 1st time round chances of it working this time too are slim.

​October 2012
I started putting all my thoughts on twitter and there I met Nikki Samuel on Twitter who introduced me to Toni Saunders. Toni started TNnME (Trigeminal Neuralgia and Me) and it started from there on in. I came out of my comfort zone and did 2 radio station interviews with Planet 106FM and Radio 1593AM as well as a Story in The Lucky Break Magazine.
One good thing I got out of having Trigeminal Neuralgia is I have grown more as a person and no longer shy or weak. I don’t take crap from anyone as I speak my mind now and well sometimes speak before I think.
Spreading awareness here in New Zealand has been quiet challenging as we are so small in population compared to the bigger countries i.e. UK & USA. From being the youngest with TN in 2007 with 6 known cases in NZ, I have now met less than 100 sufferers through Facebook Support Groups. Being part of a strong team of ITNAF (International Trigeminal Neuralgia Awareness Fighters) since the beginning in 2013 & becoming Regional New Zealand Manager for TNnME is an accomplishment on its own but being able to Raise Awareness, liaising with Mayors, Minister of Health & other Medical Professionals to having buildings/monuments Light Up Teal for October the 7th for the last 3 years is something else and would never in a million years think I’d ever be doing this or be a part off. I am no longer employed and live each day with no regrets.
Bolting out
Lagi Leau