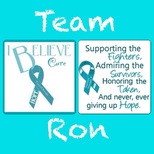 My story is not like most. I am 24 and have Trigeminal Neuralgia. The pain started in late March of 2013. It was not all the time, but very debilitating when it struck. I lived with this until early summer, when the attacks became more frequent, went to my primary doctor who thought that I had some knots in my muscles on the left side of my face. I was prescribed muscle relaxers. They did nothing. His next thought was TMJ. I tried the NSAID medications and saw my dentist (as my primary doctor asked me to). My dentist said definitely that what I have going on is NOT anything he can treat and to go back to my primary doc. When I went back with this information, I saw him and his partner, who also did a full evaluation. They both agreed that the symptoms I have are caused by Trigeminal Neuralgia. That was in October of 2013.

Prior to that in August, I left my retail job and did so at just the right time, pain had increased to the point that I could hardly function. That led to the diagnosis. November was a very hard month, I was unable to drive due to the pain and the pain medications they had me on until I could get a pain management consult.

That happened in December. He immediately put me on Gabapentin. What a nightmare the time to follow was. I had severe memory loss. I could not remember the day, date, where I put stuff, and worst of all, I could not ever remember how I wanted to finish my own sentences. I went back and told my doctor that this medication is a nightmare and I felt like I was going into early onset dementia. This freaked him out, and he told me to go off the gabapentin cold turkey (not recommended, but necessary). I started Lyrica the same day. The pain improved significantly and my memory started to return.

By late January, I was back to normal (after the gabapentin and a bout of pneumonia). I had an MRI in late January. It came back clean. The pain hit a high in February, and I had to wait till mid-march to see a neurologist, so I decided to try Upper Cervical Chiropractic care. The neurologist had nothing to offer, except for Tegretol, which I allergic to. I did not see her again.  I continued to see the chiropractor until mid April, when the adjustments started to hurt. During this time, I began seeing another interventional pain specialist who began doing a type of nerve block called the SphenoCath. These are non invasive SPG blocks. The first one I had in April 2014, and the second in May 2014. They did work. I began having pain during the Upper Cervical adjustments, and my pain doctor told me to stop seeing the chiropractor and to get an MRI. The MRI showed a few disc herniations in the cervical region. PT was started immediately and so was TENS therapy. At this time, I was being evaluated for a genetic condition that runs in my family, Acute Intermittent Porphyria (AIP), due to some issues I was having with the medications. In June, 2014 the diagnosis was positive and the pain specialist told me she could no longer treat me due to the risks.

Back to square one. I sought out a neurosurgeon and found an amazing one here in St. Louis. He suggested MVD surgery, but I was not ready at that point. MY PCP handled the medications while we searched for a neurologist to handle my case.  I got lucky in August, 2014 when I found a great neurologist who understood TN. She also confirmed the diagnosis and we started down the list of medications. I began taking Vimpat. This helped a bit, but due to side effects, we couldn’t dose it higher, so Trileptal was added. I started college during this time too. At the start, all was well. I was having no issues, the medications were helping, and all was well.

Then October came, and I ended up in the ER with a major flare. This was a wake up call that something had to be done, so I called the surgeon and asked to schedule an MVD. It was scheduled for December 17th and I made an appointment with him in November to have some questions answered. My attendance at school became spotty at best. Luckily I was covered by disability services and a plan was worked out. I ended up in the ER again in November with major pain. At this point, I was only on Trileptal due to cognitive issues, which were impairing my ability to function at school. I made it to my surgery date as well as I could.

The surgery went off without a hitch. No complications, was in the hospital three days, only one of which was in ICU. Everything was going great, and the staples came out.

The night after that (a little over two weeks post op), the pain came back. I ended up in the ER again, because nothing I was doing was helping at all. The TN is back, or possibly. It could also be due to the AIP, which can cause TN. I see my neurosurgeon early January, 2015 to discuss what my options are at this point. I am open to more surgery. I have sent emails to a few other centers, namely a renowned proton therapy center that has experience with TN, hoping they may have a radiosurgery option that is safer and possibly more effective. I am also searching for a hematologist that can evaluate the AIP further and possibly treat it. That might help the pain. Essentially, I’m open to any and all options. I will not let this disease get in my way. I am registered full time at university this semester, but am doing most of my course load online. 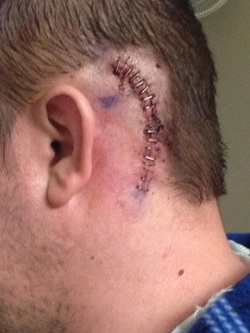 My post Op MVD scar
All in all, I want my life back, I want the old me back. This disease has changed me as a person. Some changes I am okay with, some I am not. Trigeminal neuralgia picked the wrong dude to mess with. I will win this battle.