What is Trigeminal Neuralgia and ME? 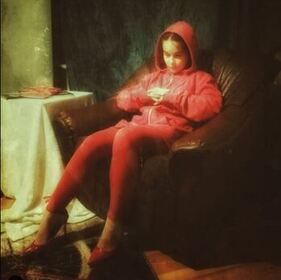 Trigeminal neuralgia (TN) is a very painful disorder of the portion of the fifth cranial nerve (trigeminal nerve) that supplies sensation to the face. It is characterized by recurrent electric shock-like (paroxysmal) pains in one or more branches of the trigeminal nerve (maxillary, mandibular, and/or ophthalmic branches), each supplying a different portion of the face.
Severe facial pain can last from a second to 15 minutes or longer; some individuals may have up to 100 lightning-like bursts of stabbing pain in a day. Although remissions are common, trigeminal neuralgia usually is a long-term condition. It can be triggered by such stimuli as heat or cold, windy hitting the face, chewing, yawning, or talking. Because the sudden, sharp pain causes the individual to wince, the condition is known as tic Douloureux or painful twitch.

The Doctors told me there is no cure for trigeminal neuralgia and that it progresses over time. Googling the disease and seeing time after time that trigeminal neuralgia nicknamed the suicide disease. It scared me to death. I would not wish this pain on anyone. It is so painful that some have taken their own life to make their pain end. We must let others know there are other options. We need a CURE!

Researching trigeminal neuralgia first frightened, and then frustrated me. I was trying to understand the pain that was changing my world.
Realizing information, support, and awareness for the TN patients were limited, I decided to do something about it.

I formed an on-line group TNnME, pushing across international borders to bring more awareness to the disease, touching lives of people as far away as Canada, United Kingdom, New Zealand, and Ireland.

TNnME’s mission:
We came together to create its first teal awareness ribbon for trigeminal neuralgia and facial pain disorders.
We came together to create the first Light Up Teal 4TN in 2013 Trigeminal Neuralgia Awareness Day on October 7th of every year.
​​A Big THANK YOU to Kathy Somers Sarah Heavey Brenda Sharp Mandi Ginn-Franz for your dedication year after year on lighting the skies Teal!!

Please let others know they are not alone on this journey. Please bring awareness to Trigeminal Neuralgia.
A BIG thank you to all TNnME Members, Friends, and Supporters for Raising your voices, sharing your stories, for the laughter and tears.
We come together to tell our stories and share our truths.

Do you know TNnME Popular Pages

Our stories about living with Trigeminal Neuralgia and Facial Pain Disorders