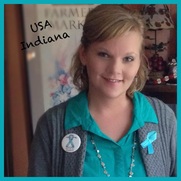 Hello my name is Rebecca and I'm a TNAF! I was diagnosed with Trigeminal Neuralgia and Occipital Neuralgia on April 10th. 2011 when I was 38 years old.
I woke up in the middle of the night thinking I had a tooth infection but it felt as if it where in each of my teeth on the bottom right side. The pain would come and go for days until I finally ended up in the emergency room. I was one of the lucky ones to have been diagnosed very early on, most wait many years being told it's everything from bad teeth to just in our heads.
Even though I was lucky to have a name of this disease, I had a hard first year as the pain came and went for no apparent reason trying to figure out my pain triggers. No one knew what Trigeminal Neuralgia was and if they did, like the doctors and nurses they sure had no idea what it felt like.
Then I found support groups on Facebook and became even more depressed talking with others who's disease has progressed making my early stage disease look like a freaking walk in the park. "Was this going to happen to me too was all I could cry!"
It took another year to accept my future as bleak as it looked but I needed to do something, I couldn't just sit around and wait for disaster to strike.
So I googled Trigeminal Neuralgia and started to read everything I could find from books to medical journals.
By a twist of fate I ran across a petition that at the time had less than a couple hundred signatures created by TNNME. This petition was to a place called The World Health Organization and they where asking that Trigeminal Neuralgia be added to a thing called a health topics list. This peeked my curiosity wanting to know what would happen if it was added, I found out that it would mean every place in the world would have to report to them any cases of Trigeminal Neuralgia which would give us much needed statistics as to how many people are affected along with funding for research and education. This sounded easy to accomplish cause after all Trigeminal Neuralgia was voted the #1 most painful condition known to man kind so how could they not add it... Well it seems it's harder than anticipated cause with over 12 thousand signatures they still haven't added us.
So I found and called this TNNME person thinking her name was TNNME and it turns out her name is Toni and she along with a handful of people had created not only this website, a petition but had made an official awareness day too... I remembered thinking who is this super woman and how can she do all this while suffering the way that I do and how much more could she accomplish with some more help?
Since joining forces with TNNME I have: been on the news, been in the local papers, created a human awareness ribbon, created a tri-fold brochure that to date over 15 thousand are in waiting rooms all over the world, spoke at a lions club luncheon, created about a hundred awareness designs used on various Social Media sites and run the zazzle TNAwareness store where all profits go to The Facial Pain Research Foundation.
So that's what makes me an awareness fighter...
Alone we are rare, together we are strong!