Press Release to the World Health Organization (WHO)

UPDATE 25 May 2019
WHO Recognizes Chronic Pain as Disease With New Coding System
​The World Health Organization has adopted a new classification system for chronic pain, assigning it the code ICD-11 in a revision of the International Classification of Diseases (ICD).
It’s the first time the ICD will include a specific diagnostic code for chronic pain.
For example, neuropathic pain can be a symptom of cancer or chemotherapy, while trigeminal neuralgia could fall under neuropathic or orofacial pain.
​
The new coding system will make it easier for physicians to diagnose, classify and get treatment for chronic pain patients. Insurers will use the new codes to authorize payments and researchers can use them to more easily track and measure the effectiveness of therapies. That’s the good news.
The bad news is that the ICD changes won’t formally take effect until January 1, 2022. ​​​ 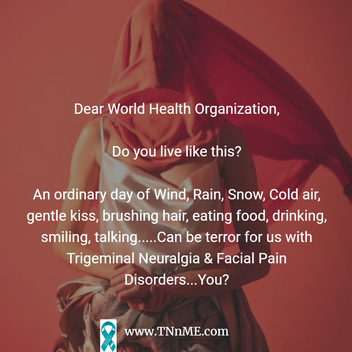 Download File
Below is the first copy of the original letter (researched and written by Nikki Samuel) that was sent to the World Health Organization (WHO).
We were advised that the letter had to be under 500 words in order for them to read it. Getting all the relevant information into 500 words was difficult, but I think it was achieved! I know there is a lot more that could have been said, but having studied the WHO website, notes were made on the information they appear to need. If you are aware of information that the WHO needs to begin to consider a new health topic please contact using the e-mail address at the bottom of the page or by using the contact page. Your suggestions may just make a crucial difference.

Dear WHO,
Sufferers of Trigeminal Neuralgia (TN) and Facial Pain Disorders are living with what is universally considered to be 'the most excruciatingly painful condition known to medical practice' and are in desperate need for help from the World Health Organization. TN is termed, 'The Suicide Disease'.

Due to the worldwide lack of education on Facial Pain Disorders among the Medical Profession, the condition goes undiagnosed or misdiagnosed for years. Most people have extensive dental work and visit several Doctors from different specialties before even being referred to a Neurologist. There are no accurate investigations so Doctors rely on the individual's description and medical history. Evidence suggests that sufferers are generally over the age of 50 years, but children and even babies have been diagnosed with TN. Many sufferers are well under the age of 50 when symptoms first present.

Treatment begins with medication, ranging from anti-convulsants to opiates. If medication is unsuccessful, surgery may be offered, aimed at giving a possible period of reduced pain. Chronic pain predisposes a person to co-morbidities -depression, isolation, insomnia, anxiety, confusion, weight gain, muscle aches and dependence on prescription medication, etc., all requiring further health care. It is unusual for sufferers to continue in steady employment due to disabling pain and side effects from medication/surgery. This damages family, social and community life.

However, it is being overlooked and ignored. The lack of knowledge within Governments, who do not recognize the burden of care and the implications TN and Facial Pain have on the necessity for support and benefits.

Lack of funding means there is no accurate data on the number of sufferers globally, but it is believed to be 1 in 15 -20,000. The estimates available say there are 4 to 8 million sufferers worldwide (The Facing Facial Pain Research Foundation).

​Given the severity of this pain, it defies belief that more is not being done. So far, we have collected over 4000 names on a petition to present to the WHO asking for TN and Facial Pain to be added to their 'Health Topics List'. This would reduce the barriers to effective health care and would raise awareness, increase understanding and give individuals and Health Care Providers access to resources and information. It would also enable researchers to conduct clinical trials to help find reliable treatments.

We are organizing the first International Trigeminal Neuralgia Awareness Day for 7th October 2013. We have produced TN Awareness Ribbons with donations going to The Facial Pain Association and The Facial Pain Research Foundation. There was an international press release on April 1st 2013. We are breaking down barriers in many countries, every day.

We believe the information provided calls for global action. It is essential that we know the true extent of this condition and the social and economic burden. With education and awareness the impact of this devastating condition can be reduced. We are calling on you, “An Organization that pursues excellence" (WHO 2013) to help us move forward to better health.
We thank you for your support in this process.

The letter above was unsuccessful and the World Health Organization still refused to put TN and Facial Pain Disorders on the 'health topics list'. It is their opinion that we are not dealing with a health issue that affects a large population and is not considered to be a public health issue.

We will continue to pursue the WHO and hope that they will listen to our current situation. At present, the World Health Organization is ignoring the excruciating, debilitating pain. We need more awareness and more signatures on the petition (www.tnnme.com). In the meantime please continue to read the current initiatives and ways in which people can help.

The below second letter was sent with the petition containing 10,000 signatures.
​Unfortunately this has been unsuccessful.

Trigeminal Neuralgia (TN) has been universally described by medical professionals and sufferers alike as the most painful condition known to mankind. For months we have been active as thousands of unified voices utilizing social media and traditional media outlets to bring this invisible illness out into the light.

People simply must pay attention to the suffering and life-disrupting plight of people who suffer from Trigeminal Neuralgia, also known as Tic Douloureux or “the Suicide Disease.” Lack of funding and awareness means there is little accurate data on exactly how many global citizens are currently facing the destructive plight of this illness. Information from the Facial Pain Research Foundation suggests it is approximately 4 to 8 million sufferers worldwide (1 in every 20 thousand individuals).

While the last epidemiological study on the prevalence of this disease is more than 25 years old, leading medical experts believe that it currently afflicts .01% of the world’s population. Misdiagnoses and failed medicinal and surgical treatments are prevalent. Given the severity of this pain and the estimated number of patients worldwide, it seems to defy belief that so little is being done to help the afflicted.

To get to the point, what do WE need from the WHO? Adding Trigeminal Neuralgia to your list of illnesses will expand awareness, grant access to further resources, and create opportunities for funding and research.

We have established the first International Trigeminal Neuralgia Awareness Day as October 7, 2013.

We have produced ribbons and online documents, and made donations to The Facial Pain Association and The Facial Pain Research Foundation. We have had numerous international press releases this year, have broken down obstacles in countries every day, met with political leaders and heads of embassies, spoken to regional health organizations, and given interviews to various media outlets.

We have created the first Trigeminal Neuralgia awareness ribbon. Additionally, we've published the first Trigeminal Neuralgia tri-fold brochure and have distributed it to in-numerous doctors, hospitals, and urgent care facilities worldwide. That stated, we cannot do all of this on our own. We are individuals casting a light on this dark, unrelenting, and painful disease.

We will continue to push this petition until WHO adds Trigeminal Neuralgia to the “Health Topics” list.
​We need your help to bring relief to millions worldwide and stop the inhumanity of ignoring such a tragic and life-disrupting illness.  (edited and written by Fred Gerwig and Toni Saunders)