UPDATE 25 May 2019
WHO Recognizes Chronic Pain as Disease With New Coding System
The World Health Organization has adopted a new classification system for chronic pain, assigning it the code ICD-11 in a revision of the International Classification of Diseases (ICD). It’s the first time the ICD will include a specific diagnostic code for chronic pain.
For example, neuropathic pain can be a symptom of cancer or chemotherapy, while trigeminal neuralgia could fall under neuropathic or orofacial pain. The new coding system will make it easier for physicians to diagnose, classify and get treatment for chronic pain patients.
nsurers will use the new codes to authorize payments and researchers can use them to more easily track and measure the effectiveness of therapies. That’s the good news. The bad news is that the ICD changes won’t formally take effect until January 1, 2022. ​
​

More than 200 Landmarks around the World will light up Teal for International Trigeminal Neuralgia Awareness Day October 7 2019.

The World Health Organization has adopted a new classification system, which will take effect January 1, 2022 for chronic pain including Trigeminal Neuralgia, assigning it the code ICD-11 in a revision of the International Classification of Diseases (ICD). It is the first time the ICD will include a specific diagnostic code for chronic pain, along with sub-codes for several common chronic pain conditions.

Trigeminal Neuralgia Awareness Day is an opportunity for us to join more than thousands of communities across the international borders in celebrating the positive impact of awareness, education, and fundraisers to increase the progress of research in hopes of finding a cure.

This event is focus on a very painful disorder of the portion of the fifth cranial nerve (trigeminal nerve) that supplies sensation to the face.  Characterized by recurrent electric shock-like (paroxysmal) pains in one or more branches. Severe facial pain can last from a second to 15 minutes or longer; some individuals may have up to 100 lightning-like bursts of stabbing pain in a day. With TN triggers by such stimuli as heat or cold, and wind hitting the face, chewing, yawning, or talking. 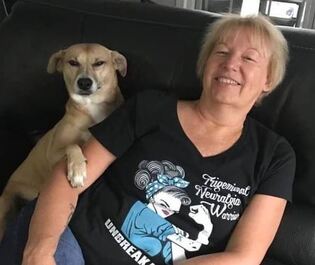 Pat and Amy Tomasulo
Laugh Your Face Off
Email: tina@facingfacialpain.org

The Zazzle TN Awareness Store What a better way than spreading awareness and giving a gift of TN related items. Shirts, Holiday gifts, stocking stuffers and all royalties are donated to the Facial Pain Research Foundation. Find out how you can order your TN Gift today at the TN Awareness Store

The Amazon Smile Program now you can shop through the Amazon Smile Program, if you don’t already have a charity with them and would like to support this issue and give the Christmas Gift of Hope that would be wonderful and if you think your family and friends would like to support an important charity raising funds to find a CURE for Trigeminal Neuralgia and Facial Pain Disorders please feel free to share with them!   Nothing will change with your Amazon account. No cost to you.  Amazon donates 0.5% from your purchases! Find out how you can sign up for Amazon Smile